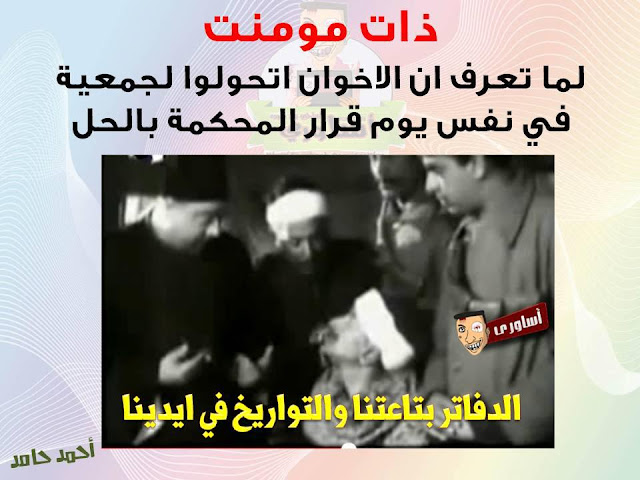 
We saw that the decision permanent absence of what happens and Aqana Almighty in their treatment of this people who sympathized with them during the January revolution and give them power Add to this that individuals Assembly or group always feel smarter and Alamutir on the teachings of Islam and we are not in a time of the prophets was Muhammad upon him the seal of the prophets and messengers .. Look, gentlemen, how to codify the Assembly and the legal status after a report of Commissioners just a decision of Her Excellency the Minister of Solidarity and Social Affairs become the group or association under the law did not cover and ((and notebooks dates and Btaatna in our hands)) and I am surprised

Nice to travel President to country different world, including the land of Sindh and India to discuss how cooperation between Egypt and these countries but the most beautiful that cares Excellency events that take place on the land of Egypt, and to work to stop the bloodshed and human rights violations and bring together Egyptian society with all its components and its sects and work on a meeting with the forces of the opposition in Egypt, also met opposition forces, India, Egypt is the first concern of any d with because in the internal force her forehead confer power on its position in front of the world .... I see that President invites the world to send businessmen to invest in Egypt d and grew to provide a climate of security and stability in light of congestion, strikes and disobedience D Ni in Port Said creeping into the rest of the accounting فظات.
Is naive businessmen to take risks with their money in a country other than the security of being at home limits w in Egypt now???
And nice to order the President to provide assistance to some brothers in time barely find the Egyptian citizen a living and suffering a lot of the people of Egypt abject poverty but the most beautiful that enough nationals Egypt first Berguiv bread and tube Albotjaz, electricity, petrol and diesel and all the necessities of daily life of the citizen simple and then think to send surplus pw Jtna pressing to neighboring d well for applications such as the view
((Elly needs deprives Whole House))

Speak to Maine to love address the people of Egypt Do you remember this question is put forward, and who answered??? I see history repeating itself and here Ambassador American Friends and Khaled Meshaal meet Supreme Leader General of the Muslim Brotherhood without participation of the President-elect who has not followed with a single character for the unfortunate events that took place in front of the extension Moqattam and it was to ايعنيه from near or far, or that events are located on the ground state other and here they are brothers enthusiastically frequency oath of allegiance to the Brotherhood, not Egypt or the Arab world or to liberate their occupied land and Jerusalem and the maximum groaning under the feet of friends built Zion has اختزلوا struggle and their struggle in the goal and narrow is pro Muslim Brotherhood, whether they are on the right or wrong and impressed all wonder what denominator and common interests between brothers in Hamas and friends the Americans and a small Arab state and what is the secret of love and passion, including what are their objectives to be achieved in Egypt Kenana??? The question is elected by the people of Egypt or leader Mohamed Morsy?? Why Gibb President for these meetings?? If the right of the U.S. ambassador and Hamas to meet with groups or political parties, why not similar meetings for the rest of the parties in Egypt?? Is it time that the Egyptian citizen feel the presence of the President and shared hopes and mother of this people??? Or is it that this is not a program renaissance in something??? And that the speaker and the only Responsible for the people of Egypt is the Muslim Brotherhood leader??? We must answer President these questions either the people of Egypt, who came president and his servant

These images Sidi President impact bullets neighborhood hacked bodies of the people of Port Said implemented between their insides and have an impact on city walls adults to wear, these images are only some of the effects Almjdhirh committed by a domestic's your government Mr. President, but unfortunately he did not commit in right of the people of a hostile or State colonial, but committed in the right of citizens to their state.
FIA president Sidi Is it possible to allow you to to cause all these brutal massacres in your family and your tribe?
Is if the free people of our city are all follow Veselk and your community ... you will agree to do this to them?
Is if it happened to your family and your tribe all this you would agree to an interview of causing kill them as you did and sent an invitation to the people of Port Martyrs???
Mr. President, with full respect for your person .... But will the blood of our children in the streets of the city of Port Said valiant best witness to what happened and these effects of bullets on the walls of our small city ..... Boundary between us and the institution of the presidency and the state of injustice made ​​us lose the most precious thing we have ..
Unfortunately Mr. President, you did not تعوا are descendants of 56 who had grown up on the dignity and pride ... and we did not agree to barter with the blood of their children ... 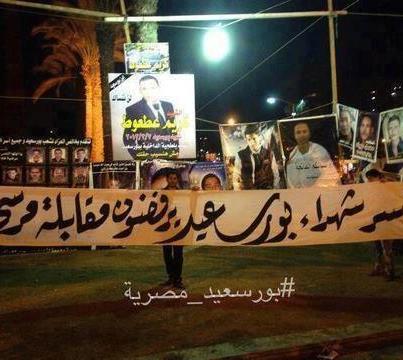 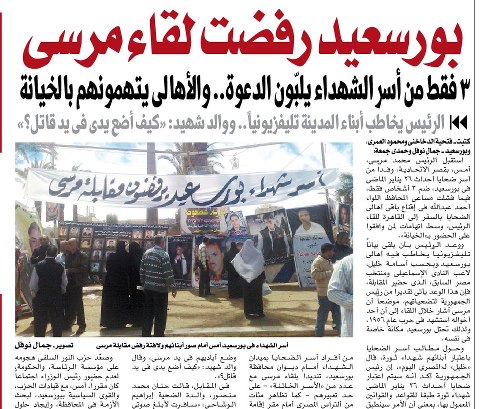 كنت اتمنى على فخامة الرئيس ان يخاطب شعب بورسعيد والشعب المصرى عامه بصورة اكثر جديه وواقعيه
Condescend President prefers directing a word to the people of Port Said and did not include an apology from His Excellency for this valiant people Tayeb stubborn even after His Excellency has signed his punishment for the Suez Canal cities to impose curfews without looking at the blood of innocent martyrs who were shedding their blood By police and some belonging to the state or group from outside Egypt also proved Photos and videos taken in the vicinity of Port Security Directorate Did not include the word new or Maishvy Repelling War to the people of Port Said, who did not يرتضى bribe political by the system and break the curfew ensuring until morning in Martyrs' Square and the streets of Port Said was not intimidated by the decision of His Excellency the President and unite everyone people and army to maintain safety and security of the citizen and the city valiant and injected blood after withdrawal Police from the site of events and recognizes our military great liarits participated army people in re-cleaning the field and coordinated manner civilized honorable and people Port Said, like the rest of the people of Egypt became lost confidence in the political leadership because he did not see a true translation on the ground for any of the covenants, which promised the people of Egypt during launching his Battle presidential election and used people that President soon back in his decisions and perjury mostly and assault on law and left of shedding blood in front of the federal and other places of peaceful demonstration in a state of silence strange fishy was His Excellency resides planet another does not carry responsibility as the top executive body of the state Egyptian so that the blood of the martyrs of the sons of the Egyptian armed forces in Rafah last month of Ramadan people do not know who the killers were and mastermind???Many reasons why this people lost confidence under his leadership Are reduces apology Alris people underestimated or is it bigger than the people?? When things remain foggy and lack of confidence in the system and the Government???

I was hoping the President to address the people of Port Said, the Egyptian people in general are more serious and realistic
مرسلة بواسطة جوهره مصر في الجمعة, مارس 15, 2013 ليست هناك تعليقات: 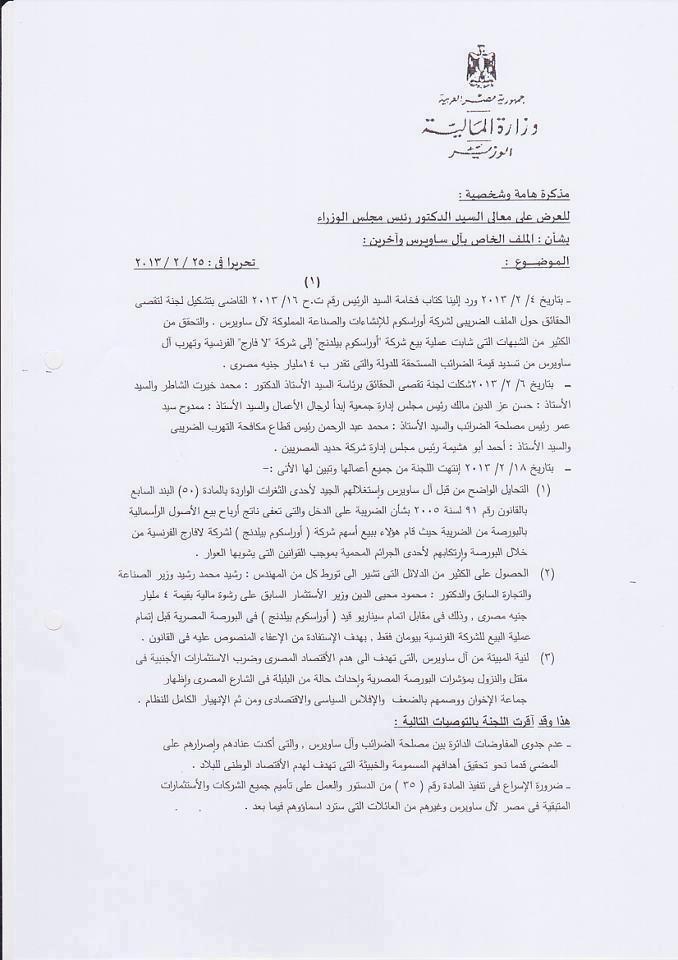 Burn Egypt??? It shed blood??? Who is the third party or fun Hidden whose name frequency since President Marina ruling??? From killing our children from the armed forces on the border in the last month of Ramadan??? And who did not reach the killers hands of justice Of are Almendson between central security personnel in civilian clothes and killed our youth and our women and children??? Who attacked the funerals that people mourned the martyrs??? From burning Cairo traumatic incident that is due us back to reality an old burn Cairo Where the security services responsible and whether the role of the police only attacking and killing demonstrators or she oppression tool in the hands of the ruling against his own people?? Can never be police tool killed and terrorism in the hands of the ruling whatever name or affiliation Partisan Fa Police of the sons of this great people, but it recently was already a tool killed and dragged, torture and rape probably wanted some to sign the police with people to filter device policeman in order to form Malisheat track particular group but dictated not happen at all, and set an example in Port Said after receipt of our army brave over the reins and the withdrawal of the police did not hear the sound of an ambulance or murders and chanted people (army and the people supported one) and I hope to hear this slogan for the police and I am confident God The Almighty In smarter this people and sons of policemen honorable that miss the opportunity to both planning or plotting to ruin Egypt and strange we have not heard commenting on the events of our government or from the President did not see decisive action by the institution of the presidency in front of this great event which threatens security and security of the homeland and the citizen and if he must cry بفخامته Vhaana a tell ((Wa anchor)) I hope to reach my cry and cry every mother and widow and sister of a martyr to his ears and hopefully hear and answer Listen, Mr. President to the people's voice and conscience and fulfilled Buaodk which elected for it the president of all Egyptians and saved what could be saved and the rest of Egypt and God I've ever experienced on you and your government and all the incumbent in this country and never will not fall, police will not fall Army Egypt's great in spite of everyone
مرسلة بواسطة جوهره مصر في الأحد, مارس 10, 2013 ليست هناك تعليقات: 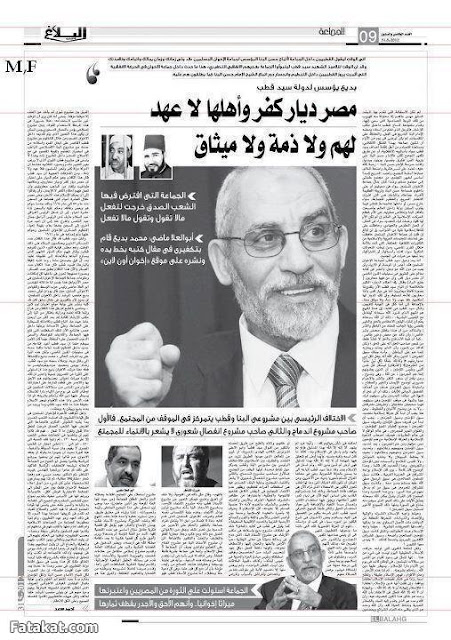 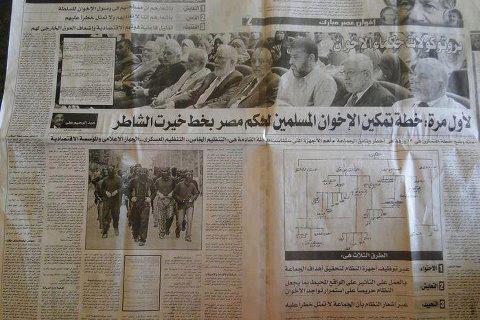 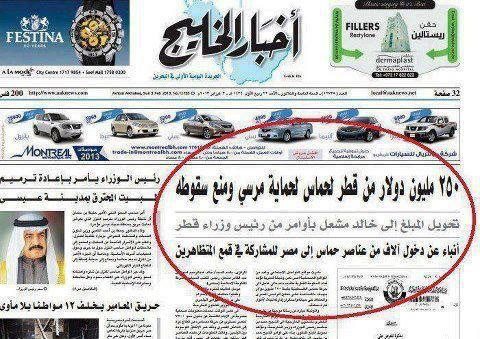 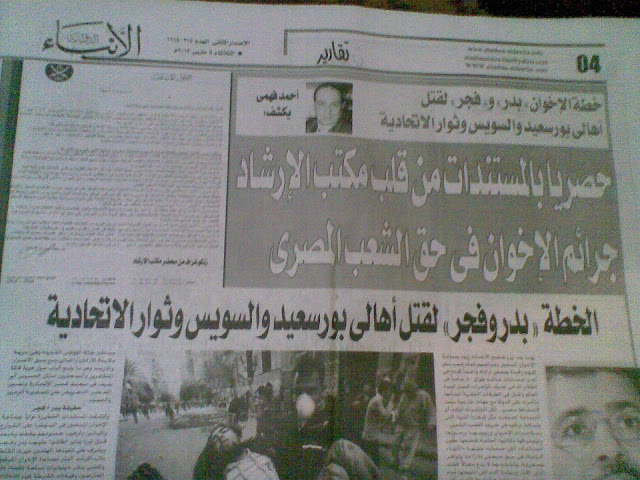 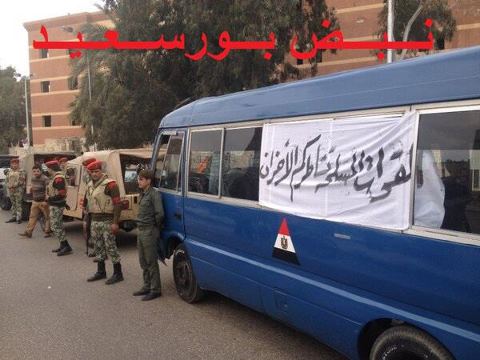 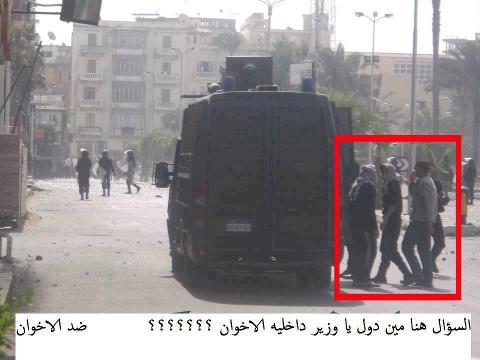 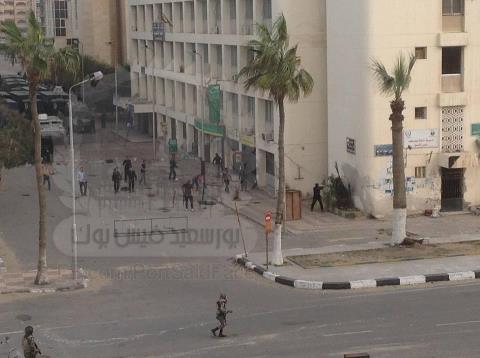 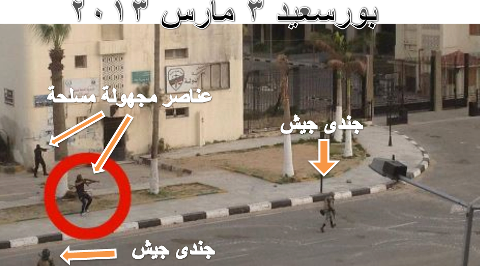 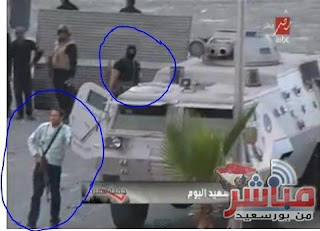